UCMC has had a long and fruitful existence, formed in 1971, it has grown into one of the largest student organizations at U.C.
Below is an article, originally published in the Fall 1999 Goosedown Gazzette, telling the tale of the birth of UCMC. 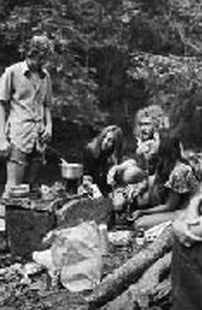 For years UCMC members have talked and speculated about who founded the UC Mountaineering Club and when. Some older members have made obscure references to different climbing legends, but no one was ever able to confirm those recollections.

Enter Annelies Koob. Long time UCMC member and former UCMC president. Anne (pronounced ah-na) has always been moderately curious as to the truth of the clubs beginnings, but not until Spring of 1999, did a series of coincidences provide her an avenue for that curiosity. At the time she worked for Benchmark Outfitters and was president of UCMC.

While at shopping one Saturday afternoon that spring, Anne overheard a co-worker talking with a man who, in passing, mentioned his involvement with the start-up of UCMC. Anne wanted to talk with this man. She waited for an opportunity to speak with him, but unfortunately he made his purchase and stealthily made his exit before Anne could corner him and exchange the UCMC secret handshake.

Fortunately, the customer just happened to have left his business card! Along with being curious, Anne is also persistent. The customer, a busy and prominent lawyer in Northern Kentucky, was difficult to reach. It was her tenacity that finally got her in touch with Lawson Walker at his home in northern Kentucky. Lawson later called another original member, Jay Budde, who contacted Terry Barnhart. Terry was excited and quite surprised to hear from the Mountaineering club and he called Anne back. He and the other founding members never expected UCMC to last too many years after they left Cincinnati. Terry contacted Denny and Jane Conners, Gerry Papania, Juanita Janigan, and John Frasca.

The eavesdropping theme continued when I overheard Anne discussing this chance encounter at a Wednesday evening meeting. After she told me the story summarized above, I got the idea to write an article about the beginning of the club. I offered to write the article and Anne enthusiastically accepted my offer. One of these days maybe I'll actually learn from the old cliche about curiosity and the cat. At the time, I had no idea what I had gotten myself into! Anne shared her information with me and I began sending e-mails to the founding members and talked with Terry, Denny, and Gerry.

Between 1969 and 1971, Denny Conners and Terry Barnhart made friends with other outdoor enthusiasts. They went climbing, backpacking, and camping as their school schedules would allow. As interest in climbing grew among Denny and his friends, they wondered how many other students might be interested in joining them.

Terry and Gerry Papania went to Clifton Gorge as often as they could. Over Spring break in 1971, these guys     went to Seneca Rocks, West Virginia with John Frasca. According to Terry, this is the trip where "the idea for a club evolved."

According to Denny, it was another outdoor enthusiast, Michael Murphy, who asked UC how they could go about forming an official club. The school assigned the new UCMC an advisor. They got permission to put up a display in the lower level of the student union, reserved a room, and held an organizational meeting. Enough people attended that they began having "periodic meetings in the student union and began organizing trips."

Terry Barnhart created posters to help get UCMC going. He created two: HIKE PRICE HILL and CAMP MT. ADAMS. Hopefully, no one ever actually camped in Mt. Adams, as I'm sure the Cincinnati Police would be less-than-thrilled with tents strewn around that part of town.

Terry and Denny became integral parts of my research. With their help and the help of some long-time UCMC members still here in Cincinnati, I contacted several of the original members using email. I created a questionnaire and sent it to them this summer. Terry and Denny are the only two who have returned that questionnaire so far and that's where I got most of the information for this article.. Terry (who still lives in Denver) and Denny Conners (who lives in Wisconsin) both have families. They not only stayed active in outdoor activities, they passed their love of the out-doors to their children, who are now of college age themselves. In fact, Denny's son sounds interested in forming a club similar to UCMC at Georgia Tech. If he does, maybe one of the traditions he starts there will be a chart of who's who, so future members can see how their club started. 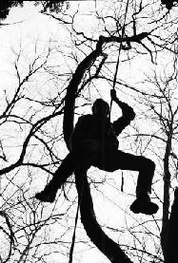 Terry and Denny shared numerous stories of their adventures with me. The stories share a similarity to many of the trips UCMC members plan today. It's Wednesday evening and someone wants to go somewhere. That person decides where they want to go, asks others to come along, they all decide who is going to drive, how long they can afford to be away from work and school, and off they go. Except for the major treks which require prior training (such as the trip several club members made to Mt. McKinley in 1997), club members are still quite spontaneous.

I found yet another common theme between today's club members and the original members. Most students lack sufficient funds to do all they want to do, such as travel and buy gear.

"We were all equipment freaks, but lacked sufficient funds to buy much," Terry recalls.

According to Terry, the first gear arrived late Winter quarter, 1972, not quite a year after their initial discussions at Seneca Rocks.. The order included a rope, carabiners, pitons, webbing, and a helmet or two. Terry ordered the equipment using his REI member number. The gear arrived , just as the seniors were trying to finish their final projects. They had little time to use the new equipment, but I know they relish the fact that their club thrived. 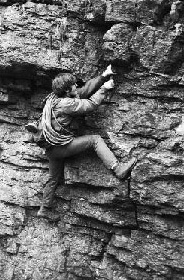 Gerry, Denny, and Terry are absolutely amazed that the club they and their friends formed, became one of the largest student groups at UC. UCMC's 140+ members and dozens of former members literally spans the globe. The UCMC "family" continues to support each other. Former members welcome newer members into their homes because they know how tight students' budgets are. Such camaraderie allows students to travel the world climbing mountains, hiking the backcountry, paddling the whitewater, and viewing eclipses, among other pursuits. These trips continue to be our escape from our everyday lives.

Terry Barnhart summed up UCMC trips in one sentence. "Our trips cemented our friendships." That tradition continues to this day.

So much of what college students learn while at college takes years to actually sink in. We must first grow up some and experience the world. But we should never forget the power that comes from a team of people striving toward a common goal. It's that teamwork that created UCMC. It's that teamwork that will help Denny's son create the Georgia Tech Mountaineering Club and it's that team work that has kept UCMC alive for almost 30 years. 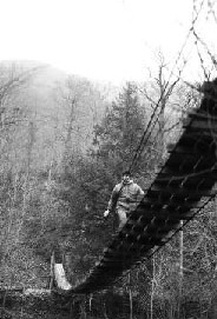 I hope you've enjoyed this first article on the beginnings of the UC Mountaineering Club. While I had no idea what I was getting into when I started this project, I thoroughly enjoyed working on it and look forward to continue re-search. I have pages and pages of stories from Terry and Denny. Gerry Papania promises to send me more and I hope to get even more stories from the other members as yet unknown to me. This project is truly a work in progress, so look for more articles about how UCMC has developed over its 30 years.